The following article appeared today at northjersey.com (The Record’s on-line news area).  A version may be appearing shortly in a print version of The Record.

WYCKOFF — The Vista independent living project at Christian Heath Care Center is “well under way” and scheduled to open by year’s end, officials have announced.

Julie Lee, senior vice president and chief marketing and development officer for the center confirmed last week that deposits have been received on 122 of the 161 units  now under construction. A maximum of 199 units have been approved. 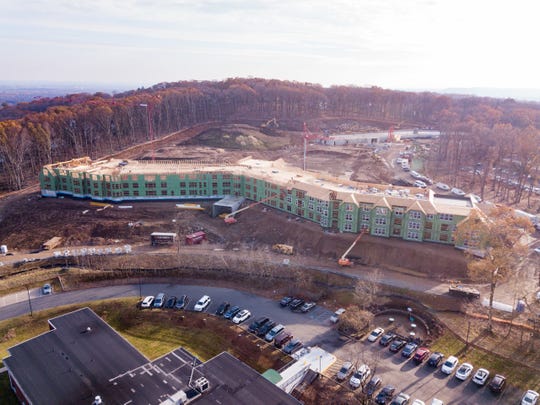 Aerial view of Vista project under construction at the Christian Health in Wyckoff. The 161-unit project is scheduled to open the end of 2020. (Photo: Photo courtesy of Christian Health)

“More than 150 people have already reserved their Vista homes and are in the design and customization phase of selecting their floorings, countertops, cabinets and many other ways to individualize their brand new homes to fit their life and style,” Lee said.

The project will expand independent living, which now offers 80 units to active adults ages 62 and older in its Evergreen Court and Hillcrest buildings.  A maximum of 199 units have been approved for the Vista project.

Lee says the entrance of the complex will be reconfigured this summer to accommodate left-turn lanes and signalization at the intersection of the Cedar Hill and Sicomac Avenues.  The signal was opposed by residents but mandated by the Bergen County Planning Board in 2018.

Vista will include a performing arts center, three dining facilities, gym, pool and salon/spa.  Residents are offered units ranging from 900-square-foot one-bedrooms to 2,600-square foot three-bedrooms. A private party room will be made available to residents for large-group get-togethers.

Vista was first proposed with 258 units in 2009. After 27 months of hearings, a 199-unit project was approved by Wyckoff in March 2013, and by Hawthorne in July 2014.  Two one-year extensions were granted to delay the start of construction until last April.

Your inspired living experience starts here. Contact us to schedule an appointment and tour of the brand-new Vista (appointments are required).

Sign up for our newsletter and be the first to learn about upcoming events at The Vista.